'Our Daily Bread' is getting a cinematic release in Britain finally. It begins an extended run at the ICA on the 25th. While it's not terribly informative - no voice over at all - it casts an unblinkered eyeball on European farming in the 21st century. And it's not a pretty picture. This will put an end to any romantic notion you may still have about how your food is grown.
Meanwhile with the temperature at 15° this weekend, the bees came out to relieve themselves (it's called a defecation flight). They've been sitting with their legs crossed for the past couple of months. 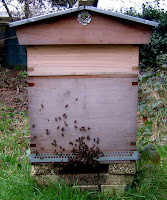 Posted by Misshathorn at 6:00 pm