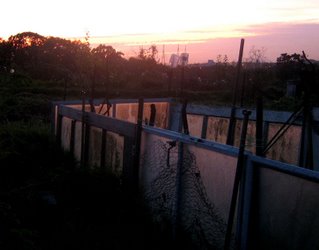 Cue Simon And Garfunkel. Sunset Sunday night on the allotment - 16:40 - ouch. The cold and the dark both hit this week in one swell foop. But I liked the pink reflection on somebody's coldframe.
Posted by Misshathorn at 9:55 pm 1 comment: 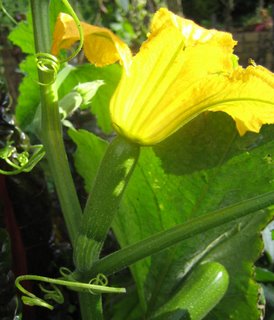 Here's one I took yesterday. Still 18 degrees, after the warmest September ever. Mind you it's raining again today. So far I've collected 62mm -!!!STOP PRESS!!! and make that 77mm- in our back garden this month and the Met office predicts rain for the next five days.
Lots of lady bug activity as well. I can't make a positive ID on these, although the 2 on the left have about 18 spots, they don't look like the 18-spot ladybird 'Myrrha octodecimguttata'. I think they are variations on the 10-spot 'Adalia decempunctata' perhaps. And the right hand one might be a 2-spot ?

On Sunday last, I unearthed the rest of my root veg harvest (barring the three parsnips that survived infancy which I'll leave to be sweetened by the first frost). Another 15 lbs. of beetroot, bringing the total to 35 lbs. (hoorah for Imperial measures)
And more carrots. Some with knobs on... 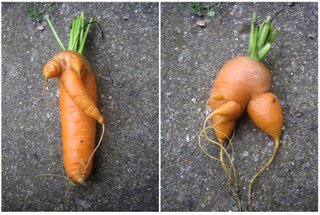 And a few plucked 'in flagrante delicto'...

The start of a karrot kama sutra.
Posted by Misshathorn at 9:46 pm 4 comments:

"The beet is the ancient ancestor of the autumn moon, bearded, buried, all but fossilized; the dark green sails of the grounded moon-boat stitched with veins of primordial plasma; the kite string that once connected the moon to the earth now a muddy whisker drilling desperately for rubies...
The beet is the most intense of vegetables. The onion has as many pages as War and Peace, every one of which is poignant enough to make a strong man weep, but the various ivory parchments of the onion and the stinging green bookmark of the onion are quickly charred by belly juices and bowel bacteria. Only the beet departs the body the same colour as it went in.
At birth we are red-faced, round, intense, pure. The crimson fire of universal consciousness burns in us. Gradually, however, we are devoured by parents, gulped by schools, chewed up by peers, swallowed by social institutions, wolfed by bad habits, and gnawed by age; and by the time we have been digested, cow style, in those six stomachs, we emerge a single disgusting shade of brown.
The lesson of the beet, then, is this: hold on to your divine blush, your innate rosy magic, or end up brown."
Thoughts on Beta vulgaris from Tom Robbins 'Jitterbug Perfume'.
Yesterday, as part of the annual harvest, thanksgiving and stocktaking, I invited a few friends to participate in a blind taste-testing on the three varieties of beetroot that I grew this year. (pictured below in exhibit a) 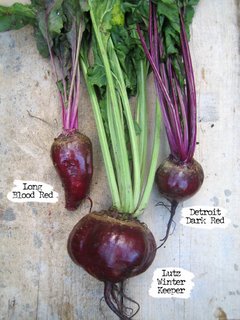 The beets were cut into bite sized pieces and baked in foil with just a drizzle of oil for about an hour at gas mark 4. 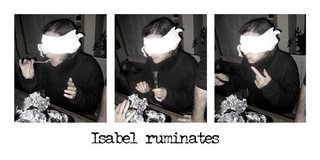 With points awarded 3 for the favourite and one for next best, the results were as follows: Lutz Winter Keeper was a clear winner with 15, Detroit Red Globe second with 7 and Long Blood Red close behind with 6.

Posted by Misshathorn at 9:52 pm No comments:

Step right up ladies & gentlemen...
The Elephant Man
'Blunt-rooted Guerande' or 'Oxheart', the catalogue said "this unique stump rooted variety may grow as wide as it is long." 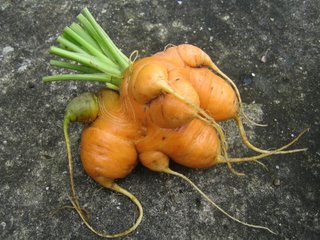 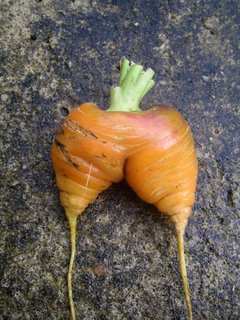 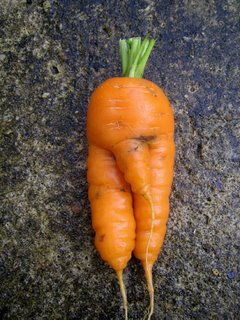 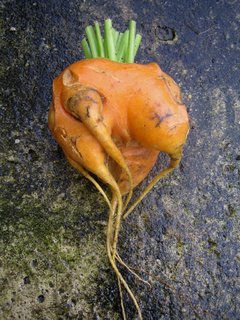 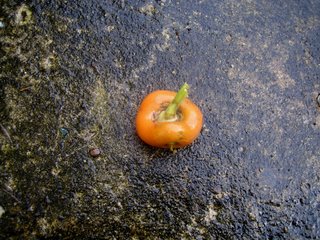 About 10 years ago I saw Todd Brownings 1932 film 'Freaks' when the censors finally allowed it to be shown on TV. During the course of the one hour film, the so-called circus 'freaks' become the protagonists we all root for and the 'normal' people end up behaving and then looking like monsters/freaks.
I guess I start to look at those uniformly shaped clones in the carrot department of the supermarket in just the same way now. Vive la difference !
Posted by Misshathorn at 9:14 pm 4 comments: