A few nice white potatoes must be cleanly pared, and all the eyes cut out, boiled until quite soft, and then strained from all the water; the potatoes must be well mashed up with some flour, sufficient to admit of their being rolled out to a paste. The paste must be well rolled out several times until about half an inch thick, then cut into cakes with the top of a tumbler, or into squares of a similar size. The best way to bake them is on a girdle, or, as it is called in the North, a "griddle". The cakes must be very lightly done and not allowed to become crisp. They require turning once or twice. When sufficiently baked they must be split open and buttered, and then laid together again as muffins are.
from Our Wartime Kitchen by Tom Jerrold 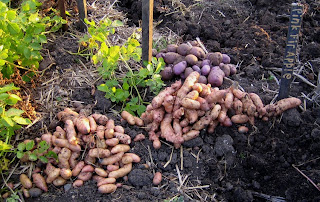 I lifted 21 lbs. of Pink Fir Apple potatoes today, the return on just 7 seed potatoes (I think that's good). There are two maincrops - Arran Victory and Verity - still to harvest now. So far it seems to be a better than average haul this year.
Posted by Misshathorn at 9:07 pm 2 comments:

Both hot peppers have been successful this year. Compact and well suited to growing in a pot in the greenhouse they are yielding dozens per plant.
Posted by Misshathorn at 6:49 pm 2 comments: