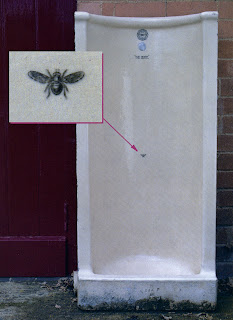 Well both colonies have laying queens now so things are looking up. Last week we even managed to find and mark the one that had emerged from the cells that Clive gave us.
Pictured above is a Victorian urinal at Thomas Crapper & Co. in Stratford (photographed in 'Toilets of the World'). The bee was printed onto the porcelain to give men something to aim at in a position that cut down on splashback. I have it on good authority that there are flies printed on the urinals at Schiphol airport, but the joke here was in the Latin name of the honey bee - apis.
Posted by Misshathorn at 10:20 pm 4 comments:

Last summer I found a number of grains had germinated under the birdfeeder and I let them grow on. I realized how ignorant I am when it comes to identifying grasses/grains so I set about collecting and studying them, learning about awns and glumes and so on. The photos above are about as far as I got. Before long though I decided that I want to try to grow my own porridge (well,at least a few bowlsfull) and have now taken delivery of a packet of hulless oats and one of hulless barley. I did thresh (and thrash) the quarter cup of grain that grew last summer but the gruel was inedible - just a mouthful of hulls. These varieties should be easier to deal with. It's difficult to find much advice in any gardening books but I guess the idea is to sow it in September or thereabouts and harvest next June.
Posted by Misshathorn at 3:44 pm 2 comments:

Good news everybody, all three apple grafts have taken and are growing away nicely. The illustrations above are from the Herefordshire Pomona 1885 originally published by the Woolhope Naturalists Field Club. These are two varieties that I planted about 8 years ago and have been fruiting well (in restricted form) the past several seasons. The Keswick Codlin is very early - mid August - and makes a good sauce and the Ashmead's Kernal is a late dessert apple. The William Crump that I grafted is a late to very late (stored until March) high quality dessert apple and the neighbour's as yet unidentified cultivar is ready to eat end of August but is also good for pies.
I spent an afternoon at the RHS Lindley Library last week and unearthed this piece of advice from Leonard Mascall 1572 - " To cherish an apple tree throw al about your apple trees on the roots thereof, the urine of old men, or of stale pisse long kept, they shall bring forth fruite much better." For plum trees he suggests " the old pisse of old men, and dregs of wine, diluted with two parts water."
So, maybe the old pisse of some pissed old men would do the job.
Posted by Misshathorn at 8:30 pm No comments: