Home from the Hunt 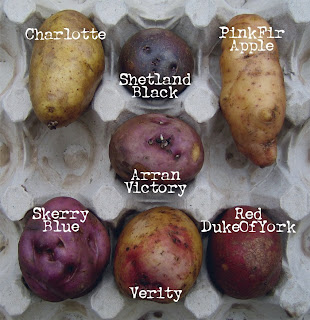 ...And here are the spoils. A total of fifty tubers of 7 varieties. Most are old favourites, but a couple that I haven't grown before - Skerry Blue & Shetland Black - which I look forward to trying. As it is recommended that the Shetland Black be steamed whole with the skin on, it might be just the spud for 'The Invalid's Mashed Potato'.
"Steam one pound of Potatoes, with their jackets on, until they are mealy; peel them, and rub them through a wire sieve; when cool, add a small teacupful of fresh cream, and a little salt, beating the mash lightly up as you go on until it is quite smooth, and then warming it gently for use."
Posted by Misshathorn at 3:25 pm 3 comments:

A balmy 8-10°C this weekend, the bees were making flights and I got a good deal of the garden and greenhouse cleaned up and ready. Perhaps a bit rashly I have started a few seeds in trays in the airing cupboard. Yellow Hinkelhatz, DeRata & Jwala peppers, Thai Long Green & Japanese White Egg aubergines, Matt's Wild Cherry, Copia, Olirose, Persimmon & Riesenstraube tomatoes and self-saved potato seeds.
Only a week now until our local annual potato fair and seed swap! 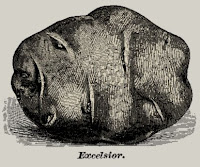 The Excelsior potato from The $100 Prize Essay on the Cultivation of the Potato with instructions on cooking the potato furnished by Professor Blot, 1870. It can be read online here.
Posted by Misshathorn at 6:47 pm 4 comments: 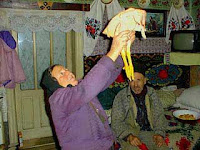 "One of my neighbours, shot a ring-dove on an evening as it was returning from feed, & going to roost. When his wife had picked and drawn it, she found it's craw stuffed with the most nice and tender tops of turnips. These she washed & boiled, and so sate down to a choice & delicate plate of greens, culled & provided in this extraordinary manner."
Gilbert White (again)
I remembered this passage while eviscerating Henry. I removed the crop still warm and stuffed with grains and I wondered just what sort of a porridge could be had by steaming it like a pudding, a mini-haggis, if you will. However, it looked to be very gritty, so I chucked it out.
By amazing coincidence though, on Tuesday, in Soho, at a leaving drink for a friend, I met Sydney, who, I later discovered, is responsible for posting 'The Natural History of Selbourne' blog - one of my favourite daily reads.
Posted by Misshathorn at 10:15 pm No comments: 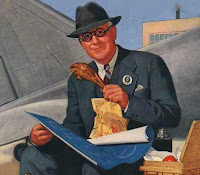 We ate Henry.
Posted by Misshathorn at 9:16 pm 6 comments:

"Farmers are in pain about their turnips, both those on the ground, & those that are stacked under hedges. The frost has lasted now just seven weeks: it began Nov 23."
Gilbert White January 9, 1789
The garden has been frosty now for over 2 weeks, which is more than we've had for the past 10 years put together I think. The ground is crunchy and won't easily let go of the leeks and parsnips. Every morning it is necessary to break the layer of ice off the chicken's water basin and some days it has been almost solid throughout. Over Christmas, I put a thatch around the beehive to help keep the heat within and now can do little more than wring my hands and fret. The MET says it will get warmer tomorrow.

Posted by Misshathorn at 12:01 pm No comments:

Ring in the New

Posted by Misshathorn at 1:25 am 2 comments: