Once again the pear harvest looks like a freak show - actually textbook examples of the Stony Pit Virus, the control of which is the removal and replacement of the tree. This year the tree has also been a victim of Unsightly Pear Trellis Rust. The fungus which causes it needs a juniper as a second host, which I have kindly provided, but even if I remove our juniper any neighboring one within a kilometre would do just as well. Does anybody know of any miracle cures?

Madonna of the Pear Albrecht Dürer
Posted by Misshathorn at 10:55 pm No comments:

19th Century nurseryman James Cuthill notes that the squash is a useful vegetable 'for captains going on long voyages'. It is common for bottle gourds to put to sea under their own steam and hove up on foreign shores to spread their seed. My landlubbers are now heading to the potting shed after several weeks of indoor curing.
Posted by Misshathorn at 12:18 am No comments:

DeCombles (1749) L'Ecole du Jardin Potager
On Squash: "As it is an economical resource for the populace whose bellies suffer all, and for the peasant in particular who cannot feed on expensive foods, it is proper for those who have rural properties, or who must support children and servants with as little expense as possible: it is proper, I say, to cultivate a certain quantity, which will be useful during the winter." 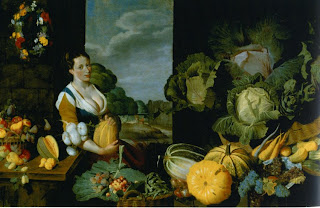 Cookmaid With Still Life of Vegetables & Fruit Nathaniel Bacon 1620
Posted by Misshathorn at 1:01 pm No comments: 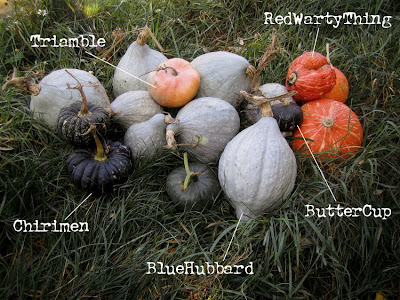 A disappointing year pumpkin-wise (see other years here and here). Buttercup and Triamble were dismal nonstarters and only one of the Red Warty Things got warts. A total weight of 66 pounds thanks mostly to the ever reliable Blue Hubbards which I grew after all the Hubbard Anna Swartz seeds refused to germinate.
Posted by Misshathorn at 10:18 am 2 comments:

Here's the rest of the brood, not so willing the be photographed. I'm getting more and more convinced that the Silver Laced Wyandotte (on the right) is a rooster, now times and a half as big as the others, much more upright posture and thicker legs. If it's just 1 out of 5 then we've been really lucky. The 'Easter Egg' bird on the left looks part Auracana part Crow and sounds like a Moor Hen. And, hooray, Doris has begun to lay again after 4 months maternity leave.
Posted by Misshathorn at 10:12 am No comments:

"I'm frightened of eggs, worse than frightened, they revolt me. That round thing without any holes... have you ever seen anything more revolting than an egg yolk breaking and spilling it's liquid? Blood is jolly, red. But egg yolk is yellow, revolting. I've never tasted it." Alfred Hitchcock 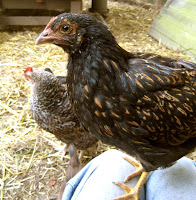 Here is the Gold-Laced Wyandotte 3 months on. 'She' bears little resemblance to the fluffball that she was in her first photo.
Posted by Misshathorn at 9:40 pm 1 comment:

'Aconcagua' Sweet Peppers have finally started to turn colour after dangling there green for months. It's been a long wait for about a dozen fruits. I might free up that space for something else next year. Hot Peppers 'De Rata' on the other hand have been producing since July, first green and now red. With the Scoville rating of 15,000 - 30,000 and heat level 7 they aren't exactly 'Gringo killers' but do have a nice afterburn. There are still 30 or 40 more to go and I'm wondering, by way of preserving them, whether to just stop watering and let them dry on the plant. Anybody done this?
Posted by Misshathorn at 10:02 pm 2 comments:

Now leeks are in season, for pottage full good,
That spareth the milch cow, and purgeth the blood.
Tusser in his 'Five Hundred Points of Good Husbandrie'

Leek Soup; Take a sheep's head, prepared by having had the hair and wool scalded off and the head split in two, take out the brains, and put the head in three quarts of boiling water, add twelve large leeks, cut up into pieces about two inches long, simmer the whole gently for four hours. Mix smoothly as much flour or ground rice as will make the soup tolerably thick, mix it with the soup, and continue stirring until the whole is well done. Season to taste and serve hot.
Our War-Time Kitchen Garden Tom Jerrold (1917)
Posted by Misshathorn at 1:38 pm No comments: