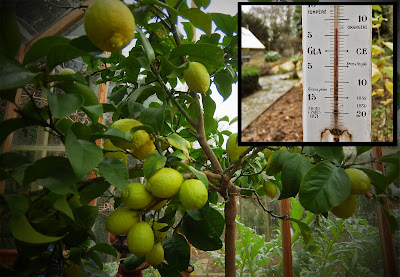 Temperatures today have been 'Orangers' and in the greenhouse there are some lemons ready to pick!
Posted by Misshathorn at 7:49 pm 1 comment:

I have started to unearth my oca tubers as last week's frost has downed the foliage. I'm quite pleased with the size this year, some really decent specimens. Though the scarlet ones with white eyes are never as big as the bicolour, there are SO pretty!
Posted by Misshathorn at 10:42 am No comments:

I have drilled 300 holes in some oak logs and then plugged each one with a mushroom mycelium covered dowel.
Now, I just wait a year and, hey presto, out will pop hundreds of shitake mushrooms! 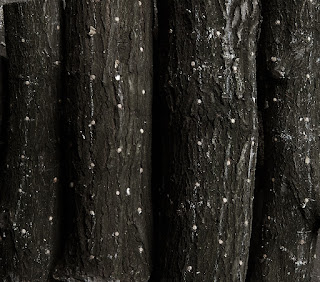 Posted by Misshathorn at 5:52 pm No comments:

Once upon a time I had the idea of having a corner of the garden inspired by Alice-in-Wonderland with a huge chair surrounded by oversized plants - sunflowers and dahlias for example - to make one feel they had just taken a sip from the bottle labelled 'Drink Me'.
Maybe that time has come, while sorting my new seed packets I have noticed a bit of a theme... 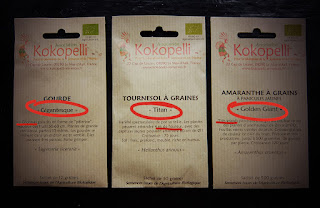 As always, click the pic to biggen. Or nibble a bit of the small cake with the words 'Eat Me' beautifully marked in currants.

Posted by Misshathorn at 3:25 pm 2 comments: 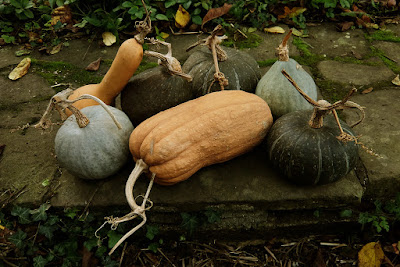 Well, the crop of 2017 (minus two Canada Crooknecks that we've already eaten) doesn't exactly make my chest swell with pride. Though the Violina Rugosa front and centre is a fine thing.
Still, there's always next year ...
Posted by Misshathorn at 10:28 am No comments: 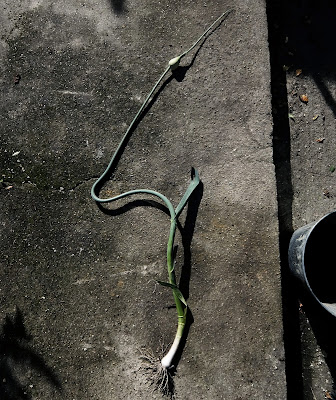 Posted by Misshathorn at 10:40 pm No comments:

It's been a good summer for corn - mind you, never enough sweet corn to really satisfy as I can't spare that much space. But we've this Dakota Black popcorn for the long winter nights in front of the idiot box. And it tastes remarkably better than anything you get at the cinema. Because popcorn makers buy by weight and sell by volume, industry research is all about achieving the biggest flakes, never mind the taste just add more butter and salt. 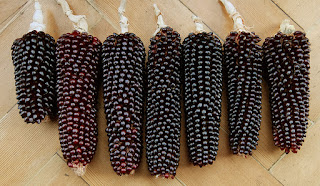 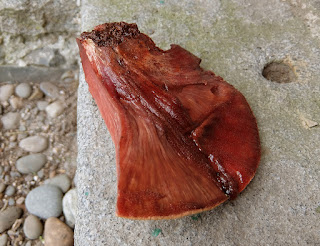 I bagged a Beefsteak Fungus and some Chanterelles on our weekend walk. The latter so delicious I only remembered to record them with one bite to go. The fungus is more challenging or 'interesting', and possibly just a bit too glibbery texture-wise. I also collected enough sloes for a few bottles of gin and a bag full of rosebay willowherb foliage which I will ferment and dry to make 'Ivan Chai'. 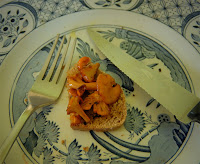 Posted by Misshathorn at 8:20 pm No comments: 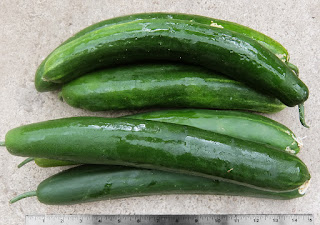 An embarrassment of cucumbers
Posted by Misshathorn at 4:22 pm 1 comment: 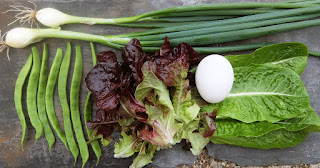 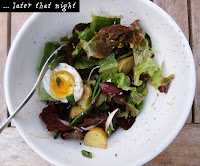 Posted by Misshathorn at 8:51 pm 3 comments:

All-night rain has filled the water butts again, soaked the earth and has made weeding quite pleasant. I thinned the carrots and did a final thinning of beets (lunch).
Meanwhile I have just finished reading Richard Mabey's terrific book 'Weeds', the story of outlaw plants - considered culturally, historically and botanically. It looks like there may indeed be fundamental gene complexes shared by many 'weed' species which predisposes them to fast growth and adaptability. So, John Ruskin wasn't far from the mark when he said
" A weed is a vegetable which has the innate disposition to get into the wrong place ... It is not its being venomous, or ugly, but its being impertinent - thrusting itself where it has no business, and hinders other people's business - that makes a weed of it."

"What would the world be, once bereft
Of wet and of wildness? Let them be left,
O let them be left, wildness and wet;
Long live the weeds and the wilderness yet."

Gerard Manley Hopkins
Posted by Misshathorn at 2:59 pm No comments:

Due to my laissez faire method of gardening, I get many things self seeding. Chiefly amaranthus, lettuce, chard and nasturtium. Several generations on and possibly having crossed with some local pigweed, it's a joy to see the amaranthus emerge unbidden in plain green or wine red or a hotch-potch of dappled and infused intermediates.

Posted by Misshathorn at 5:03 pm No comments: 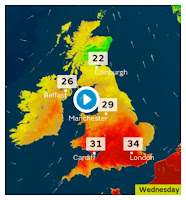 Here is what the weather looked like yesterday. Which prompted this lamentation on the MetOffice site ...

Posted by Misshathorn at 11:52 am No comments: 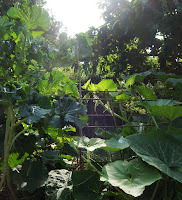 On this, the hottest day of the year (so far) - 32° - a look at how things are progressing. I was late sowing - April 10th for tomatoes, courgettes, squash and cucumber. But even so, cucumbers are ready to cut now, courgettes just a few days away and black cherry tomatoes have formed and will ripen in another couple of weeks I guess. Early riser beans are 6 feet up the poles and charlotte potatoes are in bloom behind them. The corn is as high as a pygmy goat's eye and there is lettuce aplenty and still pickings of chard and kale from last year. No rain in sight so lots of watering to be done... 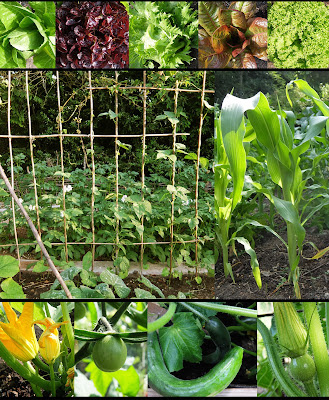 Posted by Misshathorn at 12:14 pm No comments:

A couple of new garden projects this year - a wildflower meadow and hugelkultur. Two weeks ago I constructed my first Hugel and have now begun to Kultur it. I achieved a height of about 3 feet and it's about 10 feet long. So, perhaps not as high as is optimal, and it will settle. Though I can add to it in the fall. I've started it off mostly with bush beans and a few cucumber and courgette. I will be adding some chard, spinach and nasturtiums soon and perennials later.
Anyway, Ta-Da! 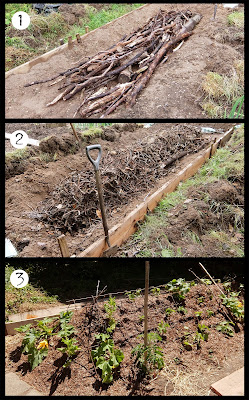 Posted by Misshathorn at 3:43 pm No comments:

Before leaving for Canada I did a little garden DIY. I built a half-timbered mock-Tudor birdhouse and constructed a wattle containment for the 'hedgerow' that I'm trying to beat back control. Happy to report that a pair of Great tits have set up housekeeping in the nestbox and I hear a chorus of peeps from within every time an adult flies back with it's beak full. Impossible to get a photo of entry or exit - just a blur. 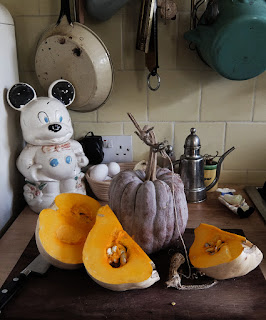 Just eating up the last of last year's squash. After a two and a half month winter sojourn on Toronto Island I've spent the past few weeks playing catch-up in the garden. Trays of seedlings are now coming along in the green house and most of the beds are weeded. Not so many weeds this spring due to the lack of rain, and I'm already siphoning grey water into the rain barrels. Oh, maybe it's too soon to start moaning about dry weather.
Posted by Misshathorn at 10:12 am No comments: 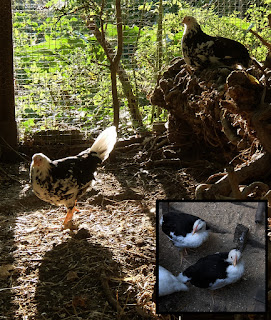 I realize that I haven't even immortalized them here with a photo or description. My two Exchequer Leghorns who hatched June 5th along with two brothers that were later transported back to the farm. Here they are at a few weeks old and then again at three months.
Posted by Misshathorn at 10:55 pm 3 comments:

Posted by Misshathorn at 11:31 am No comments: