I've been in training all summer for the 'Water Carrying To Protect The Seedlings Amidst Drought' event at the next Peasant Olympics. Now that the ceiling has lowered and everything is sodden I think I'll work on some '60-metre Snatch the Grain and Get It Into Storage' drills.

According to 'Science and Lore of the Kitchen' by Harold McGee, researchers have isolated five capsaicinoid components that have different effects on the mouth. Three give 'rapid bite sensations' in the back of the palate and throat, and the other two a long, low intensity bite on the tongue and mid-palate. Capsaicin accumulates in the fruit concurrently with the pigment during ripening and is primarily found in the white placental tissue to which the seeds are attached. So you can moderate the heat by scraping away all the white bits.
This year my peppers have grown really well, much better than anything else. The two smallest are the most fiery - Gelbe Kirschen & Pretty in Purple. These are really very attractive plants, small and bushy and covered with fruit, but they are fiddly to prepare. Doe Hill is sweet and the other two are mildly spicy. (The slate is ruled in one inch squares.) 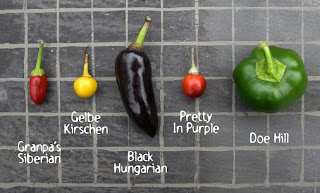 Posted by Misshathorn at 8:01 pm No comments: 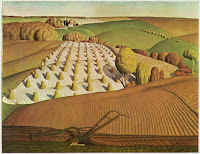 Aah, the majesty of summer now fades...(click here for the rest)

Myriads of Insects sporting in the sunbeams. September 21 1789
Showers, rainbow, bright. Barley in a sad condition about Basingstoke. Rams begin to pay court to the ewes. September 21 1775
One little starveling wasp. September 20 1782

Here in London 2010, the weather stays warm, 25° expected tomorrow.
Posted by Misshathorn at 10:50 pm No comments:

F for Fall that is. Time to draw a line under this rubbish summer. Too little rain - not enough time to water, tomatoes that grew taller and taller without fruiting, early kale and beets that ran to flower, squash that sat looking miserable and refused to swell... 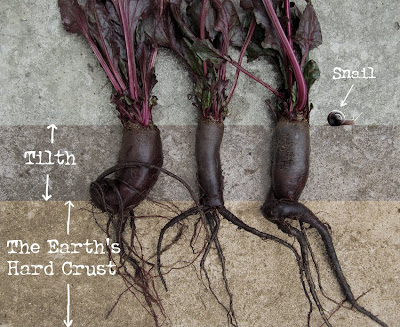 A picture of my garden's soil structure is beginning to emerge based on the shape of these recently unearthed beetroots (Medwyn's Extra Long Selection of Cheltenham Green Top).
Posted by Misshathorn at 9:35 pm 3 comments: