Well, our bees didn't survive the winter after all. They expired sometime between January 17th and the end of February. I suspect their numbers were not great enough to generate the necessary warmth. The queen was not a good layer and it was still quite a small colony in the autumn so I left them all the honey they had made and put in an extra dummy board to decrease the area that they would need to warm. Maybe in a normal winter they would have managed. Anyway, we weren't the only ones. I'm cleaning the hive, putting in fresh brood foundation and getting my name on a list for a swarm.
Meanwhile there is some bee-inspired art to see at the Contemporary Applied Arts. (sample below)

Posted by Misshathorn at 8:09 pm No comments:

"Half a bunch of grapes, and a couple of spoonfuls of jelly (lemon, or wine) left over from dinner, do not by themselves look particularly attractive, one has to admit; but just melt the jelly, and set the grapes therein, using a small pudding basin, or brawn basin, as a mould, and see how glad some sick child will be of the morsel, though your servants would probably disdain to touch it."
Epicure 1898
I have just planted out a grape vine, Boscoop Glory, having thought about doing so for longer than I care to think. Single-handedly I might add, as my left (drawing) hand is in an ulna gutter slab due to a spiral fracture of the 5th metacarpal. Anyway I'm looking forward to some sweet black grapes in the future. 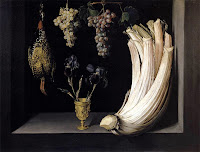 * On this day in 1780 "Brought away Mrs.Snooke's old tortoise, Timothy, which she valued much, & had treated kindly for near 40 years. When dug out of it's hybernaculum, it resented the Insult by hissing." Mrs. Snook died and was buried on the 15th of March and her nephew Gilbert White took over his care. A little biography of Timothy (actually a female) can be read here. Or listen to a reading of Mrs. Snooke's Tortoise here.
Posted by Misshathorn at 2:47 pm 3 comments:

"A subtle, understated film that somehow manages to encompass themes of life, death, happiness, art, and why Bill Gates has yet to turn his mansion into a major claymation studio."
Portland Mercury
Last night we got to see legendary animator Bruce Bickford, in person, at the Horse Hospital where they premiered his newest film 'Cas'l' along with a short piece of drawn animation. They also screened a documentary about Bruce and his highly original, energetic, almost relentless claymation, 'Monster Road' by Brett Ingram, which I would urge everybody (even non-animators) to view at your earliest opportunity. ('Rocaterrania', another documentary by Brett Ingram was shown at the Museum of Everything last autumn and is worth a look as well.) Anyway, to whet your appetite, here is just a snippet of the philosophy of visionary Bruce Bickford.

Posted by Misshathorn at 5:49 pm 5 comments: 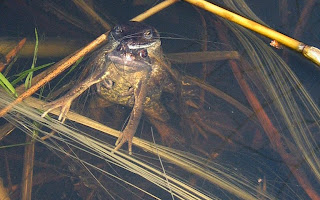 From How to Run an Allotment by Alec Bristow 1940
Posted by Misshathorn at 9:30 am No comments:

"I introduced turnips into the field in King Williams reign; but the practice did not travel beyond the hedges of my estate till after the Peace of Utrecht." 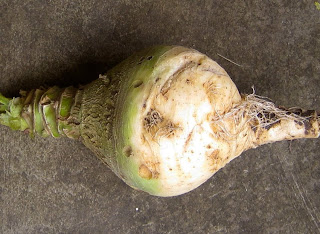 Eating up the last few turnips now. The sun is out again after a month and a half of grey & rain.
Posted by Misshathorn at 12:09 pm 1 comment: