The first radish seedlings have broken through the ground outside and all of the brassicas have germinated in the greenhouse. I spent the weekend debrambling and unearthing roots to enlarge the vegetable beds. Lots more to do. M. lopped off the tops of some shrubbery to allow more light through along the south border. And I sowed tomatoes seeds (10 varieties) in a tray on the dining room radiator.
4 Eggs today.
Posted by Misshathorn at 7:35 pm 1 comment:

Leonora Carrington's painting of a cabbage (the alchemical rose?) which we saw last autumn in an exhibition entitled 'Surreal Friends' at Pallant House.
Posted by Misshathorn at 10:19 pm No comments:

Be Careful With a Spud

Soviet Accident Prevention Posters @ How to be a Retronaut 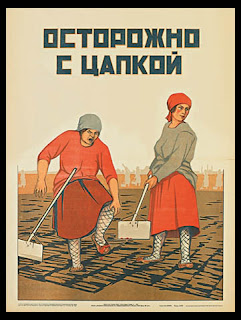 This month is starting to look a bit more promising in the sunshine department. This is the third day in a row that we've woken to a blue sky. S. gave me a little lemon tree (pictured on the left) which she grew from a pip and it's been spending afternoons in the greenhouse where temperatures have been up to 20°. And the wild plum by the garage is in full bloom. The Met has now published figures for last month which show South East England to have had one of the dullest Februarys since records began.
Indoors, peppers and aubergines are forming their first true leaves.
Posted by Misshathorn at 9:54 am No comments: