Front Gardens of Note No.3

(yes, they are plastic)

... as I Made It Weak For the Queen Mother

Take 18 quarts of spring-water, and one quart of honey; when the water is warm, put the honey into it. When it boileth up, skim it very well, and continue skimming it, as long as any scum will rise. Then put in one Race of Ginger (sliced in thin slices), four Cloves, and a little sprig of Rosemary. Let these boil in the Liquor so long, till in all it have boiled one hour. Then set it to cool, till it be blood-warm; and then put to it a spoonful of Ale-yeast. When it is worked up, put it to a vessel of a fit size; and after two or three days, bottle it up. You may drink it after six weeks, or two months. 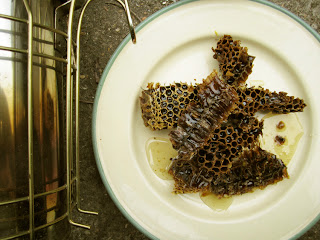 We performed a shook swarm Sunday and housed the colony on fresh foundation, leaving two bait combs for the varroa to make their way into. I scraped away a bit of honeycomb and pollen stores for our consumption from around the capped grubs that we had to bin. A little taste of things to come.

It's fiddlehead season in New Brunswick where I've spent the past week. We canoed up the Nashwaak River, picked and cleaned 35 pounds of them and what we couldn't eat fresh are blanched and packed in my mother's freezer. Enough to see her through the next winter I think. 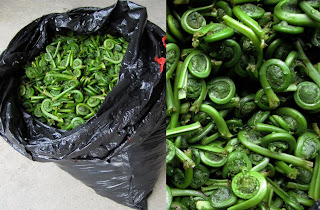 I've just cleared the weeds from the back bed and readied it to be this year's bean field. I've been finding all the potatoes that I missed digging last fall. And a lot of seedlings that, but for me, would be trees one day. I guess it wouldn't take very many years of neglect for this lot to remove all trace of my attempt at control. 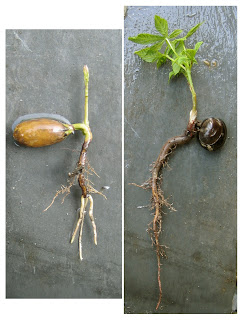 Posted by Misshathorn at 10:46 pm No comments: