Both Roseval and King Edward which I grew from bought tubers had to be lifted mid-August due to continuous attack of blight. It would have been a magnificent haul if they could have been left to bulk up for another month as the average tuber count per plant was over 10, so about 400 from just 36 plants. The potatoes that I grew from TPS fared better and I left them in the ground until early October. Below are three that did very well and I will be growing again next year. Of course the Landrace seeds are a mixed bag so very unpredictable but I'm going to save a few of these tubers to grow on as well. And the bottom picture is a selection of some of the ones that I've grown on from saved spuds of previous Tom Wagner trials. 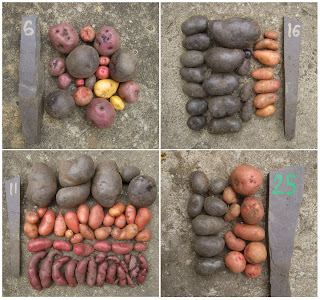 Posted by Misshathorn at 6:49 pm No comments: