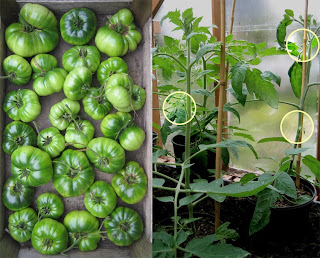 We had a 'Smith Period' in our back yard sometime last week I think. It wasn't a 'Beaumont Period' because it hasn't been warm enough, but the net net is that I've taken up all the outdoor tomatoes - still green (on the left). I'm hoping some of these will turn red rather than brown, because I've already made all the green tomato chutney that we can possibly stomach. The plants in the greenhouse haven't been affected yet but they have nearly finished producing anyway. It has been 3 fine months of tomatoes for breakfast, lunch and dinner, with jars of catsup and confit squirreled away for the winter. So, no complaints.
But, for next year, I have devised a cunning plan (well, read 'Tomatoes - The Inside Story by Terry Marshall) to extend that to 5 or 6 months. Firstly, I'm going to start the initial sowing much earlier with fewer plants - February possibly, now that there is a greenhouse. I think I'll restrict them to 4 or 5 trusses. And then I'm going to start to root the shoots that I pinch out along about mid May for a second crop to follow on fruiting after the first dwindles. It didn't occur to me this year until after my July 16th post and ensuing discussion with Patrick. I took some cuttings July 20th (on the right) which have now produced flowers and while it's unlikely that there will be any decent fruit it was a good dry run.
Posted by Misshathorn at 10:02 am