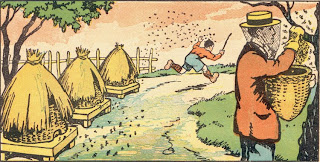 Days are shortening, beans are drying on the vine and apples are dropping. It is about this time of year that the drones destiny is sealed.
"One morning the long expected word of command goes through the hive; and the peaceful workers turn into judges and executioners. The great idle drones, asleep in unconscious groups on the melliferous walls, are rudely torn from their slumbers by a wrathful army of virgins. They wake, in pious wonder; they cannot believe their eyes; and their astonishment struggles through their sloth as a moonbeam through marshy water. They stare amazedly round them, convinced that they must be victims of some mistake; and the mother-idea of their life being first to assert itself in their dull brain, they take a step towards the vats of honey to seek comfort there. But ended for them are the days of May honey, the wine-flower of lime-trees and fragrant ambrosia of thyme and sage, of marjoram and white clover. Where the path once lay open to the kindly, abundant reservoirs, that so invitingly offered their waxen and sugary mouths, there stands now a burning-bush all alive with poisonous, bristling stings. Before the bewildered parasites are able to realise that the happy laws of the city have crumbled, dragging down in most inconceivable fashion their own plentiful destiny, each one is assailed by three or four envoys of justice; and these vigorously proceed to cut off his wings, saw through the petiole that connects the abdomen with the thorax, amputate the feverish antennae, and seek an opening between the rings of his cuirass through which to pass their sword. No defence is attempted by the enormous, but unarmed, creatures; they try to escape, or oppose their mere bulk to the blows that rain down upon them. Forced on to their back, with their relentless enemies clinging doggedly to them, they will use their powerful claws to shift them from side to side; or, turning on themselves, they will drag the whole group round and round in wild circles, which exhaustion soon brings to an end ... The next morning, before setting forth on their journey, the workers will clear the threshold, strewn with the corpses of the useless giants; and all recollections of the idle race disappear till the following spring."
M.Maeterlinck The Life of the Bee

I've just purloined over 30 pounds (11 litres) of honey from our army of wrathful virgins. The early honey is very light and flowery tasting while this late harvest has a much more complex and, I think, interesting flavour. Let's say, the first goes well in tea and the second is better on toast. As you can see it's much darker as well. 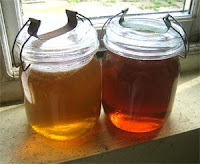 Posted by Misshathorn at 1:22 pm

I say "yikes!" Who knew that the bee's life was so brutal.

Also, my retinas are still burned from reading so much white type on black ground. Everywhere I look I see stripes.

Sorry, it's a trade off - black on white is easier to read but the colour of the images is so much warmer and more vibrant on a black background. I usually keep the text minimal but I didn't know where to stop with this. In time, the whole book will probably be here in little bite sized pieces.