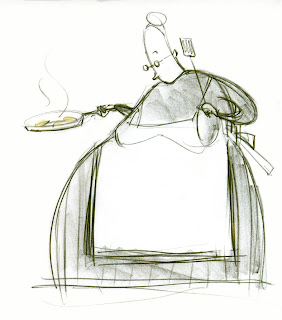 I'm just thawing out after 10 days in a bleak and snow-driven Canadian outpost - the name of which apparently derives from the Mohawk word for 'where there are trees standing in the water'. It's got me thinking about chilblains. When was the last time you heard someone complain of a chilblain? Well at any rate I've come across this remedy should one be in need from Heath Robinson's 'Sicilian Char Woman'.
" ... and in his fifth year he developed a chilblain of the most painful description. Every remedy was tried, dried turnip seed, applications of roasted capers, poultices of wild figs and nard, fomentations of honey and turbot's roe, and many other recipes for the curing of chilblains, recommended by anxious friends. Nevertheless the blain grew chillier and chillier until at last they were compelled to send for a physician.
The physician, after spending a whole afternoon examining the foot, eventually took the most serious view of the case imaginable, and hastily wrote out the following prescription, promising to call again in a few days:
1 Pint New Gruel, 1 gr. Tincture of Green Acorns, 1/2 gr. Hypo, 1/16 gr. Castor Sugar, 3 Clove Kernels, 1/2 lb. Coffee Essence, 3/4 lb. Sugar of Zinc, 2 gr. Bisulphate of Lead, 1 Pint Spirits of Sulphur, 5 gr. Bicarbonate of Saltpetre, 1 oz. Table Salt.
Three drops to be mixed in a quart of lukewarm water and gently rubbed into the roots of the blain every five minutes, day and night, until it's disappearance, which, if all went well, should take place in about six month's time. "
Posted by Misshathorn at 10:21 am

I would be surprised if the doctor did show his face again in a few days after such a recommendation. I have read that good results may be had by rubbing a raw onion on chillblains but thankfully have never needed to test the theory.

I have Chilblains. They are awfully itchy & very painful! I've tried everything for them!!!

I get them EVERY winter without fail!!! I'm going to be seeing my doctor soon to see if there is something to help me, because they really hurt!!!

Hello Anonymous
I've just come across some other remedies that might help you.
Rub with salt and onions when powdered together; or a poultice of hot roasted onions kept on two or three days - change often; or roasted turnip parings, hot - change them twice a day; or wash them with brake root tea with tincture of myrrh in a little water.