High rise living with views out over the city for south London's stag beetles at Nunhead cemetery - part nature reserve part burial ground. They don't offer 24 hour security which is a pity as a magpie or crow can pick off emerging bugs in their dozens. Maria.Fremlin has posted some particularly macabre footage of the aftermath of such an attack which could be animated out-takes from a Svankmajer film. She also very helpfully provides a guide to the larvae of several beetles which is worth consulting before stomping in disgust any and every grub one unearths. Size would seem to be the big giveaway for indentifying a stag beetle larva - 8 centimetres! 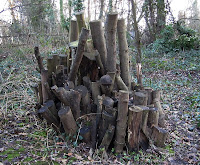 Posted by Misshathorn at 1:29 pm