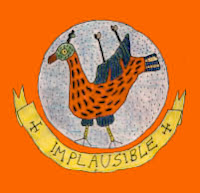 Happily Hooting Yard is back on the air again after having been quiet all summer while Resonance decamped to SE1. You can listen live on Thursdays at 6:30 or the repeat broadcast 1:00 Mondays. And I was more than a little pleased this week to find myself linked there in a piece which mooted a Peasant's Party for the U.K. Hear! Hear!
On Thursday's lunch break, I went to Pied Bull Yard to see the paintings which Julian Perry has produced on the Manor Garden Allotments - Sheds Lost to the Olympiad. The title of the show 'A Common Treasury' is a quote from the Digger's manifesto of 1649 which protested their right to grow food to feed themselves. " In the beginning of Time, the great Creator Reason, made the earth To Be a Common Treasury, to preserve Beasts, Birds, Fishes..."
The sheds themselves are now buried behind the 11 mile wall of the Olympic Security Zone.

Posted by Misshathorn at 3:09 pm

It is a tragedy. The sheds are so beautiful. I suppose they will be destroyed?

Gone. You can read more about it by googling Manor Garden Allotments. But it's all over now. This is not what Olympic committee wants the world to see when the attention is focussed here for those 4 weeks in 2012. Never mind that more people in Britain get their exercise and fresh air through gardening than any other leisure pursuit. And that includes synchronized swimming and 100 metre hurdles.