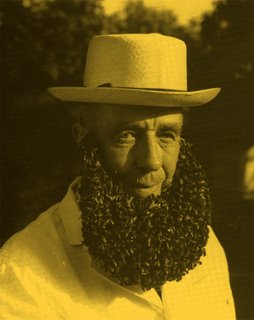 Wrap yourself around a cup of mead and toast the patron saint of bees, beekeepers, candle-makers and anybody else with a hairy eyeball. It's time for me to reflect upon this past summer in our bee-loud glade. I won't say that everything that could possibly go wrong did, because next year is bound to prove me wrong. Our bees were very swarmy and twice beflummoxed us before we mastered the art of bee wrangling. Once the third swarm was re-housed, the bees decided to build comb on the other side of the dummy board rather than on the frames provided. So, when next we lifted the roof, all we could do was watch in horror as their wild comb collapsed in on itself. Then, in August, the varroa mites moved in (quicker than we ever thought possible) and all but decimated the first hive's population.
Well, we've tucked them up for the winter now and, fingers crossed, we'll still have two colonies come spring. On the plus side there was this - 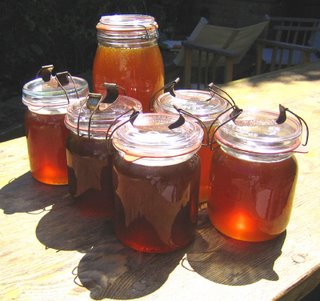 B is too B-flummoxed to comment. She is, of course, knitting. But she thinks you did a honey of a job.
LSH

just wondering if you're planning to become a bee-earded lady? I'm sorry I missed out on the mead-toasting of Saint Ambrosius...I shall have to raise a glass to him tonight. Your honey harvest looks delicious...

I can only imagine that 'LSH' is the long suffering husband??